Reflecting on struggles and social movements in Europe and beyond

Networking with representatives of social movements and civil society organizations from France, Latin American and Caribbean countries, sharing activist success stories, learning about fundraising opportunities and philanthropy for democracy-related projects in Europe, civic-sightseeing in the footsteps of revolutionary women and looking for constructive responses to the problem of shrinking civic spaces – the weekend between 24th-27th January in Paris was full of valuable encounters, reflections and discussions for activists from the European Democracy Network (EDN). 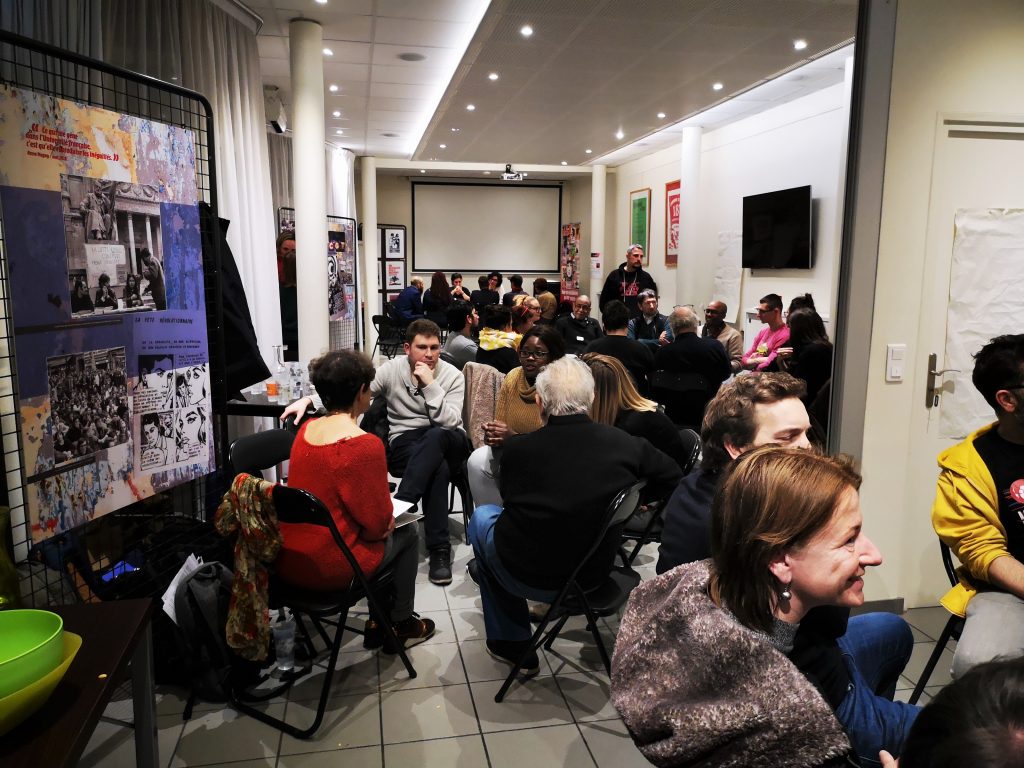 Our first evening in Paris started with an Activist Networking Meeting on current struggles for democracy, human rights, for a diverse and inclusive society where the EDN participants exchanged with local activists from French social movements as well as representatives of associations from Latin America and the Caribbean. The meeting that took place in Le Maltais Rouge, was inaugurated by a keynote speech by Bernard Dreano – the president of the Centre of International Solidarity Studies and Initiatives (Cedetim) and co-founder of the Helsinki Citizens Assembly. In his speech, Dreano outlined the civil society struggles and the power of social mobilization for democracy, peace and fundamental rights from a broad historical perspective, underlining the importance of international solidarity.

Listen to the full keynote of Bernard Dréano here:

The rest of the evening was dedicated to group discussions about the situation in countries like Brazil, Haiti, Hungary and France and exchange of experience in building resistance and mobilizing citizens against state oppression as well as opposing racist, nationalist and neoliberal narratives and policies in European, Latin American and Caribbean countries. Listening to stories from different contexts and perspectives helped us to discover certain patterns of the oppressive systems as well as recognize universal motives and values behind citizen uprisings.

The following video highlights the current struggles for democracy, human rights, for a diverse and inclusive society in Brazil, Haiti, Hungary and France:

Philanthropy for democracy-related projects in Europe

On Saturday EDN activists were sharing their success stories which had an impact on raising awareness on certain social, ecological problems in their local communities and influencing broader political situation. Moments of sharing and reflecting on our smaller and bigger successes in urban, social and political activism reminded us the importance of maintaining hope notwithstanding the difficulties in everyday struggles.
Also the session on fundraising and philanthropy run by Inga Wachsmann, expert in philanthropy, showed us the multitude of opportunities that we have to collect funds for our activities and democracy related projects in Europe. Systematizing our knowledge about the available support of private and public donors was very encouraging to apply for new grants and planning ambitious initiatives.

Listen to Inga's input on Philanthropy for democracy-related projects in Europe:

In the footsteps of revolutionary women

On Sunday the group discovered the city from a feminist perspective. Florence Al Talabani – from the Community La guide de Voyage – guided us through the history of revolutionary women and feminist struggles in Paris: from the times of Enlightment, through their roles in French Revolution, to contemporary times. The stories of discrimination and underestimation of women’s influence in science, art, culture, politics and public life in general, made us realize how much stereotypes and prejudices are still present in our societies and how much there is still to be done when it comes to equalizing opportunities for women and men.

You can hear some of the stories of this city tour here:

The last session of our EDN meeting raised the problem of shrinking civic spaces in France. Our colleagues from VoxPublic presented the current situation of civic groups, organizations and leaderless grassroots movements organizing themselves to protest and protect basic democratic rights and freedoms achieved in the course of history by the civil society. On the examples of Gilets Jaunes (Yellow Vests) and Nuit Debout (Rise up at night) movements in France, we were discussing current challenges, various strategies and effective techniques to resist the state and police interventions, anti-social policies and campaigning for more justice, democracy and equality.

Jean-Marie Fardeau, Director of VoxPublic, highlights the various forms of attacks that civil society organisations are facing in France:

Benjamin Sourice, Responsible for supporting citizens initiatives at VoxPublic, gives an overview of the social movements and new forms of struggling and mobilisation in France since 2016:

The EDN meeting in Paris was co-organized by the partner organization VoxPublic, with the support of Citizens for Europe (EU) and in collaboration with participating activists from the Initiatives For Another World (IPAM) and the Foundation For Ethnic Understanding. With the help of professional moderator and facilitator – Adia Sakira – activists participating in EDN project had an opportunity to reconnect, reflect collectively and evaluate their activities implemented so far. They have also expressed their expectations regarding future meetings and planned the next steps of building collaborative transnational network in defense of democratic values, human rights, social and climate justice.
Reinforced and reunited, with new dose of inspirations and motivation we felt encouraged to continue this exciting common journey and we are looking forward to our next EDN meeting – this time in Brno!