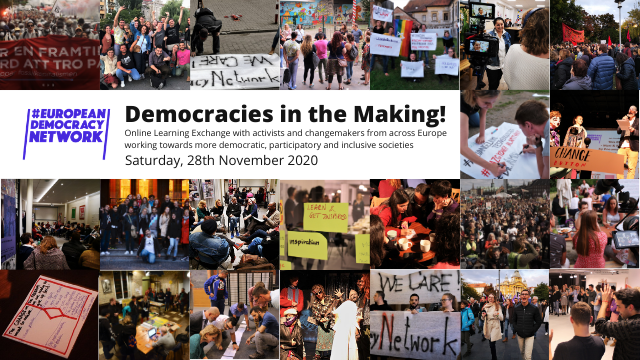 Democracies in the Making!

Online Learning Exchange with activists and changemakers from across Europe

How can civil society and activist movements resist and handle attacks by authoritarian governments on democratic values and basic rights, also in times of the COVID-19 pandemic? And how can new forms of interventions inspire these movements and revive democracy?
Organised within the European Democracy Network on Saturday 28.11.2020, our practice-oriented Online Learning Exchange "Democracies in the Making" connected about 150 activists defending democratic values and changemakers designing and implementing new models of participation and deliberation, beyond periodic elections.

During the morning session, five activists told us stories about the free Belarus initiative, the “LGBT-free zones” opposition movements in Poland, the Civil society response to the authoritarian takeover in Hungary, about the Massive protests and Women Revolution in Poland as well as Inclusion and Diversity in Extinction Rebellion movement.

Future of Democracy and Democratic Innovations in Europe