People with a migration background can decide the election.

People with a migration background can decide the election.

For the first time, research-backed estimates are now available.

"The low representation in the Bundestag is both an expression of the lack of promotion of young people in the parties and the lack of prioritisation of immigration society issues," says Daniel Gyamerah, Head of Division "Advocating For Inclusion" at Citizens For Europe.

Highlights of the study:

Based on the microcensus and data from the Federal Election Commissioner, Jun.-Prof. Arndt Leininger, PhD (Chemnitz University of Technology), Julius Lagodny (Cornell University), Daniel Gyamerah and Deniz Yıldırım-Caliman (both Citizens For Europe), with the support of Correlaid e.V., have for the first time estimated the number of eligible voters with a migration background for all 299 Bundestag constituencies.

Our partners at CorrelAid have written a blogpost showcasing results from CorrelAid’s #tidytuesday inspired challenge to explore different ways to visualize the potential electoral power of people with so-called migration background in Germany. Check their data vizualisation: https://correlaid.org/blog/potential-political-power/

Prof. Dr. Corinna Kröber, Junior Professor of Comparative Politics at the University of Greifswald, has merged our data with survey data on the 2017 Bundestag elections to analyze how the size of the group of eligible voters with a migration background affects their voting behavior. She published her analysis in an article on the blog Counting Counts: https://countingcountsblog.wordpress.com/2021/09/23/becoming-what-you-see-how-the-voting-behavior-of-citizens-of-immigrant-origin-is-shaped-by-their-district/ 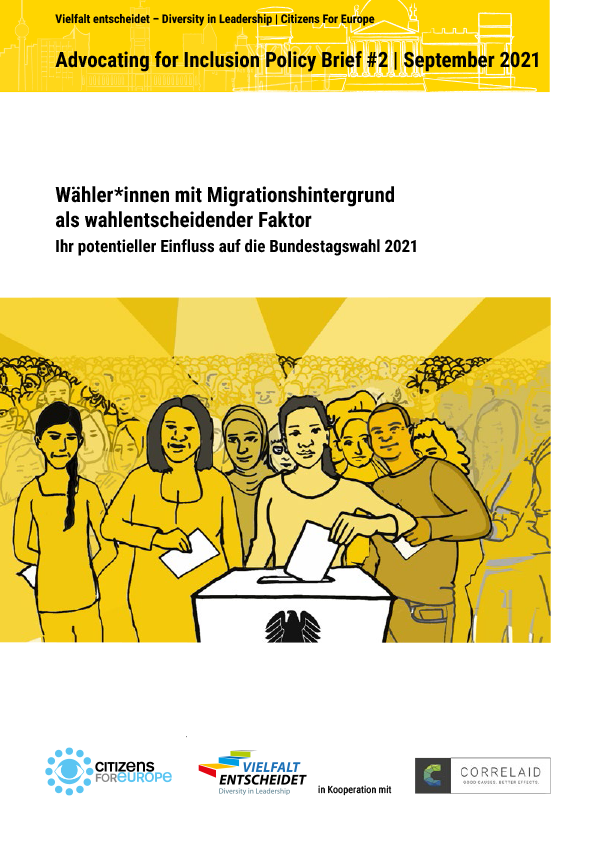