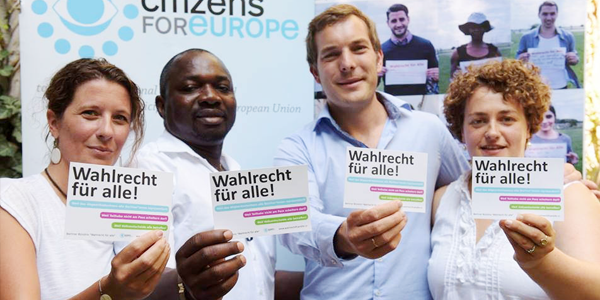 We demand the right to vote for all people living here, regardless of their nationality.

In Berlin, more than 700,000 residents are excluded from the elections to the House of Representatives and referendums, simply because the Berlin electoral law is tied to German citizenship. Since 2011, the Berlin alliance “Wahlrecht für Alle” (“Voting Right for All”) has drawn attention to this injustice and has been committed to enabling the political participation of all people living in Berlin, regardless of their nationality. We therefore call for national voting right for EU citizens and third-country nationals, as well as for local and municipal voting right for third-country nationals.

“A person who moves here from Munich, Halle or Rostock can already vote for the House of Representatives after three months. I live here since 2006 and am still not allowed to. I have to ask myself: how is this person more of a Berliner than me?”, argues Séverine Lenglet, who comes from France and campaigns with the alliance “Wahlrecht für Alle”.

Nearly a fifth of Berliners are foreigners. Many of them have lived in Berlin for 5, 10, 20 years or more. They have grown up, studied and worked, paid taxes and started families here. They are members of sports and cultural associations, have social networks and circles of friends in the city. The capital is their home.

Nevertheless, Berlin treats them like second-class citizens. They are not allowed to vote when it comes to, for example, education, energy, rent, local transport, construction projects or the police. This is true for both the local government and all referendums, such as about Tempelhof field, rent or water in Berlin.

EU nationals may vote for the district council (BVV), but not in the election to the Berlin House of Representatives or referendums, which legally shape the lives of citizens of Berlin. Third-country nationals are not even allowed to vote at the local level. Compared to other EU countries, Berlin and Germany clearly lag behind with their understanding of democracy. Foreign voting rights are already established in 15 EU countries.

The “Wahlrecht für Alle” alliance puts this topic on the public agenda.

In 2011, Citizens For Europe initiated the alliance “Wahlrecht für Alle ", a network of Berlin clubs, neighborhood organizations, unions, associations, and politicians. With symbolic elections, street actions, interviews with candidates, infographics, media cooperation and press releases, the alliance has sharpened the political and public awareness of the exclusion of more than 700,000 Berliners in referendums and elections to the local government. During a protest action on Tempelhof field in 2014, the group leaders of the current governing parties signed the alliance's call: for all foreign nationals settled here to be given the right to vote at the state level.

The campaigning, events and actions of the “Wahlrecht für Alle” alliance made a significant contribution to this success. Nevertheless, we also see a risk here: Federal Council initiatives can become a one-way street, that due to a lack of political unity between the federal states can put the topic of inclusive voting rights on ice for years to come, including in Berlin. At the same time, the state of Berlin has the option of introducing the right to vote at state level for EU citizens and third-country nationals, as well as the right to vote in municipal elections for third-country nationals in Berlin.

It’s not necessary to amend the constitution in order to achieve voting rights for all!

Up until now, politicians have been able to hide behind the impression that the German constitution forbids foreigners the right to vote. They refer to the judgment of the Federal Constitutional Court (BVerG) on the case of Schleswig-Holstein 1990, as well as the judgment of the Bremen State Court of spring 2014. Both institutions relied in their judgments on Article 20.2 of the constitution, which states, "All State power originates from the people” and in their judgments, fatally and falsely, they arbitrarily limited the term “people” to the national construct “German people ". However, Article 20.2 explicitly does not speak of the "German" people, since here the democratic principle and not a nation-state principle is applied. Standing contrary to the constitutional authors’ inclusive understanding of democracy, both verdicts are highly exclusionary and nationalist.

The introduction of municipal voting rights for EU citizens by the 1992 EU Maastricht Treaty was also carried out without intervention by the Federal Constitutional Court and without any further discussion of the term "people" or of an amendment to the constitution. Already at that time, the Constitutional Court questioned its own interpretation of the term "people", but warned lawmakers to establish a consensus between the electorate and the population about naturalization.

The right to vote should not be tied to citizenship!

Berliners are often confronted with this argument: "If foreigners want to vote here, they should become citizens." That gaining the right to vote in Germany today can only be carried out in conjunction with gaining citizenship is backward, because it is not about nationality or loyalty, but simply about the democratic principle. Especially in the European Union, in which people can move freely and choose their place of residence, making the right to vote dependent on national citizenship is senseless and reduces free movement to a right of consumption and production.

Moreover, for many third-country nationals, receiving dual nationality is impossible due to "country of origin" provisions. They would first have to renounce their original citizenship. Enacted in this way, the right to vote simply does not correspond to the reality, diversity and complexity of the lives of millions of people living in Germany. "I had to give up my Chinese nationality and am now going to apply for a visa to visit my family in the country where I grew up. Would you like to do that yourself? "Asks Wei Wei, author. “I have an emotional connection with the country where I was born, where my parents live. It is not easy to give up your nationality and that has nothing to do with loyalty to Germany. Besides that, it can complicate inheritance.”

Another counter-argument: naturalization is dependent on income. One condition to be granted German citizenship is "independent subsistence (including dependent family members) without social assistance and unemployment benefits". In other words, if the right to vote is linked to naturalization, the right to vote is indirectly linked to income. Those who earn little money are unable to participate in a democratic process, a condition reminiscent of feudal Europe.

In some countries the right to vote is totally unrelated to citizenship. In New Zealand, for instance, non-citizens are even able to take part in national parliamentary elections- if they have lived for two years in the country and have an unlimited residence permit. That’s what a modern and inclusive democracy should look like.

It only takes political will!

While many in Germany argue that the constitution must be amended, it is only due to the interpretation of the concept of “the people” by the Federal Constitutional Court. Many experts argue that the new composition of the court has also modernized its understanding of democracy, and above all its awareness that the legal frameworks of EU treaties and OECD and UN conventions have long called for voting rights for foreigners.

It would only take one case to be brought before the Constitutional Court so that a more inclusive reinterpretation of the term “people” is decided and the foreigner's right to vote becomes a reality. It needs no constitutional amendment, no 2/3 majorities, but only political will and courage! For this reinterpretation, a case needs to be brought before the Constitutional Court. Berlin can bring this forward and thus be a pioneer in Germany towards an inclusive democracy.

Whereas various innovations to democratize contemporary democracies have been imagined, designed, tested and even institutionalised on different levels of decision-making (e.g. citizens assemblies, participatory budgeting, deliberative polls etc.), Democratic Innovations (DIs) still do not play a role in youth work and non-formal education today. The DIYW (Democratic Innovations in Youth Work) project aims at tackling the issue of democratic disenchantment and erosion by developing, testing and disseminating didactic materials that support youth workers and teachers to introduce to young people the subject of Democratic Innovations.
Do you like it?
Read more 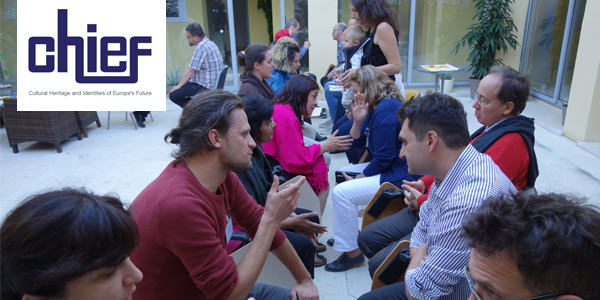 CHIEF, Towards an inclusive cultural education

The European CHIEF project builds a dialogue between young people, researchers, education practitioners, policymakers, community leaders and civil society activists in order to facilitate a future of Europe based on more inclusive notions of cultural heritage and cultural identity. Citizens For Europe will methodically design a multi-stakeholders' process and accompany a series of workshops to create a sustainable environment for dialogue between these actors and develop effective policy recommendations at the local and European level.
Do you like it?
Read more

We demand the right to vote for all people living here!

In Berlin more than 700,000 residents are excluded from voting in elections for local, regional and national representatives and referendums, simply because the Berlin electoral law is tied to German citizenship. Since 2011, the Berlin alliance “Wahlrecht für Alle” (“Voting Right for All”) has drawn attention to this injustice and has been committed to enabling the political participation of all people living in Berlin, regardless of their nationality. We therefore call for national voting right for EU citizens and third-country nationals, as well as for local and municipal voting right for third-country nationals.
Do you like it?
Read more

Started in December 2015, the two-year NiCeR project used theater and the power of storytelling to develop a counter-narrative that strengthened youth participation in local cultural and social life while promoting skills development, empowerment and living together in cultural diversity. In Berlin, 30 young people from Berlin, Kosovo, Syria and Afghanistan came together, created and performed the musical What the Volk?! based on identity, belonging, migration and the power of language.
Do you like it?
Read more 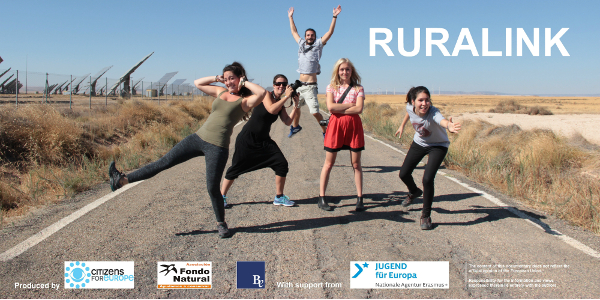 You and Me - Empowering rural youth

A Youth film project for a new European narrative

Our youth film project brought together 9 young who grew up in the rural areas in Spain, Greece and Germany. They grabbed a camera and told their own stories beyond the media spin and stereotypes that have dominated the mainstream narrative in the European Union over the last few years. After taking part in a film training, they travelled in September and October 2016 as transnational groups through the rural areas of Brandenburg (Germany), Lesbos (Greece) and Aragón (Spain), where they interviewed other youngsters about their lives in the rural areas, their dreams and everyday challenges.
Do you like it?
Read more