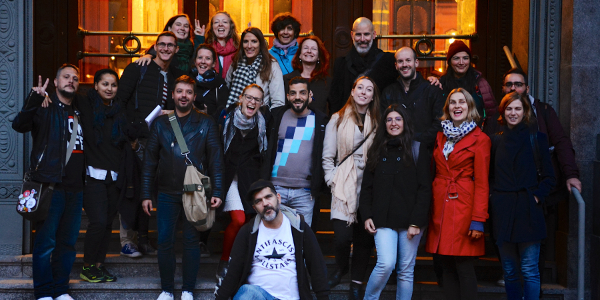 During the first session of the three days meeting, the activists of the European Democracy Network (EDN) shared their experiences and stories of activism, the opportunity to discover the variety of topics that the group has been dealing with: supporting a citizen protests against the construction of the planned transnational highway network (Via Carpatia) running through valuable natural areas between Poland and Hungary; Organising the local demonstrations of the global movement Fridays For Future and dealing with the negative media coverage of ecological initiatives in different countries; Taking part in the equality parades in support of LGBTQI+ movements and rights of sexual minorities under attack from the side of the state government and Catholic Church in Poland; Campaigning for the local elections in the city of Budapest in favor of a broad oppositional coalition standing against the widespread corruption and violating the rule of law by the governing Fidesz party; Facing the police oppression and violent behavior of policemen against anti-fascist activists participating in a protest against far-right extremists on the streets of a German town; Co-organising the alternative G7 Summit organized in the south of France promoting ecological, anti-racist and anti-colonial solutions to the world's problems. 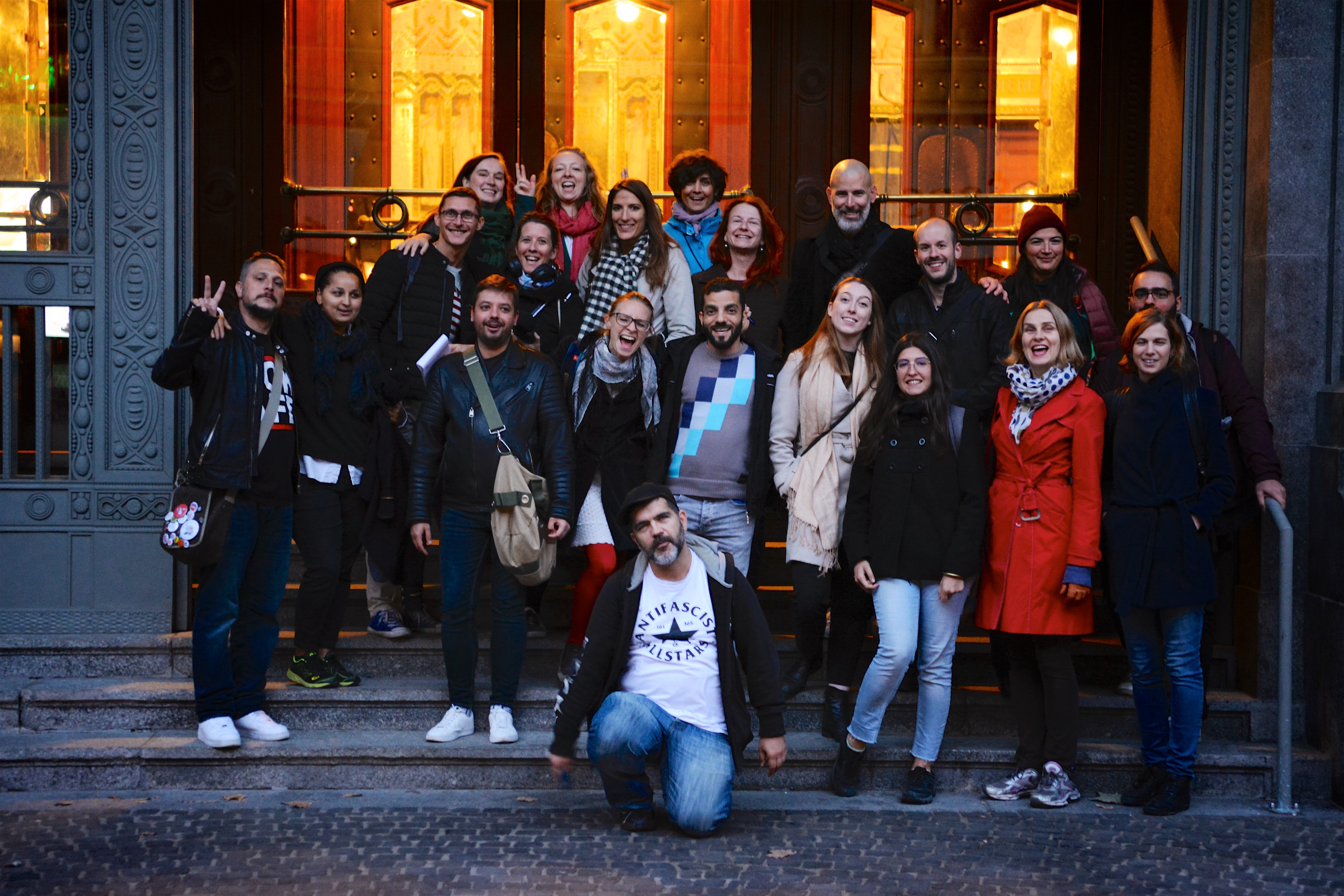 This personal overview of the situation in different countries was followed by a civic sightseeing tour on “Shrinking civic spaces in Budapest” run by Daniel Dobrentey - a lawyer and political scientist from our partnering organization Hungarian Civil Liberties Union (TASZ). Guided by Daniel we were visiting a number of community centers, places of civic reunions and artistic initiatives which are successively disappearing from the map of Budapest in the last years. In all cases we could observe a certain pattern of political intentional, unlawful actions that prevent people to take independent, grassroots initiatives and lead to shutting down the civic spaces by the local government. The local administration clearly actively combats the critical standpoint and gatherings of alternative communities and social movements whose activity is the sign of still vibrant civil society in the capital city of Hungary.

Listen to Ádám Schöneberger from Aurora, a center for the independent civil and cultural scene in Budapest that Fidesz government has been trying to shut down.

During this tour  which happened one week before the local elections in Hungary, we also had the opportunity to visit the campaign center of the opposition coalition in the 8th district of Budapest. János Pálinkás, one of the EDN activist and active member of this opposition campaign in the district told us who are the coalition parties and stories of intimidation from the Viktor Orbán’s Fidesz local government to silence local opposition.

On Sunday 13th of October, the opposition pro-European centre-left candidate Gergely Karácsony won Budapest, a reward for the hard work and a sign of hope for János and his team!

Be a Mobile Activist!

The next day was dedicated to a training session on creating compelling video stories with our mobile phones. The workshop was conducted by Séverine Lenglet from the coordinating organization – Citizens For Europe –  and one of the activists participating in our programme – János Palinkas. During the session we have learned basics in film making and how to use filming and editing apps to create video content with our mobile phones. Our newly acquired knowledge about composition, shot patterns, different light and sound options was tested in practice while realizing our own video productions and creating short video stories in small teams. 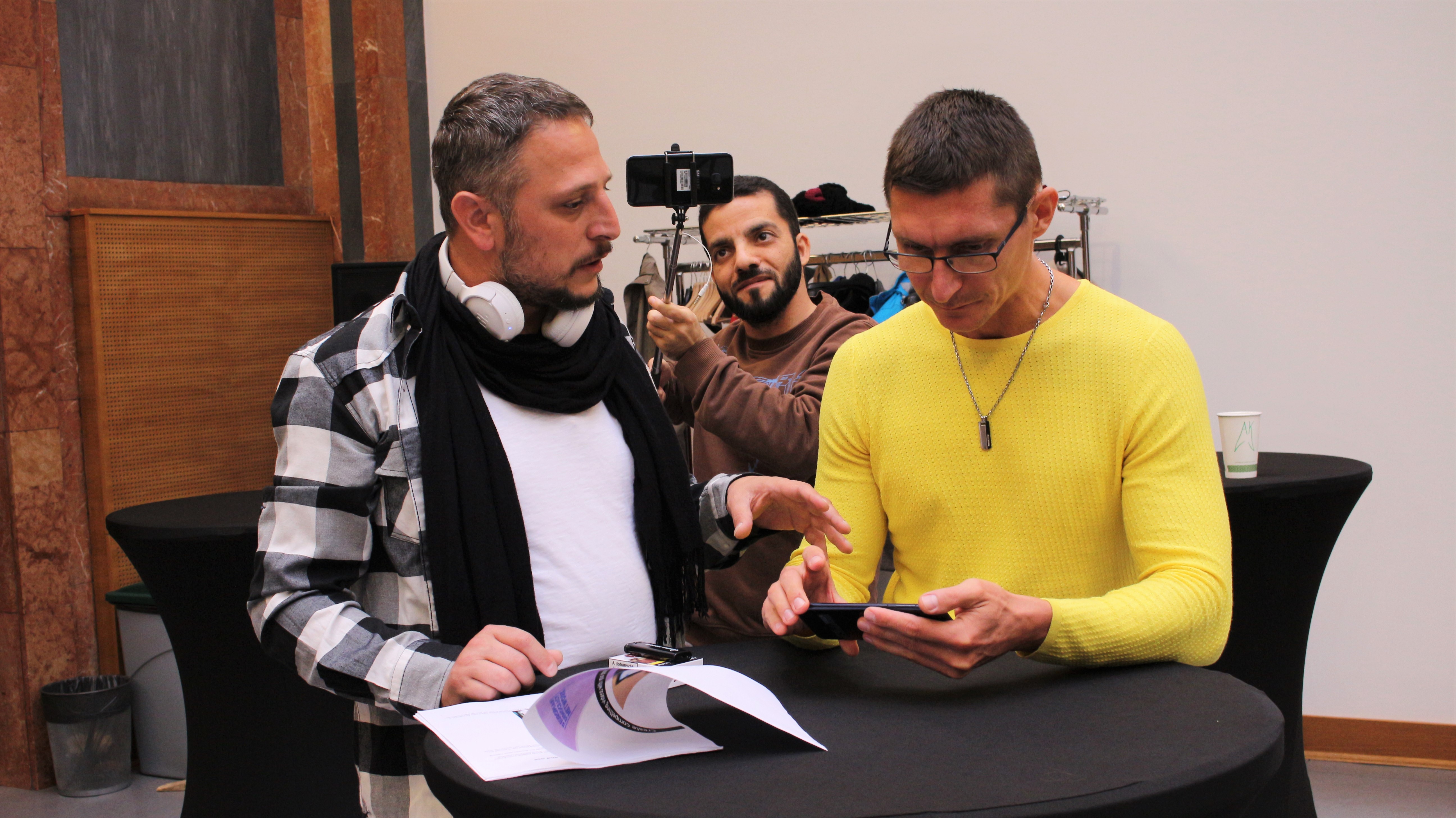 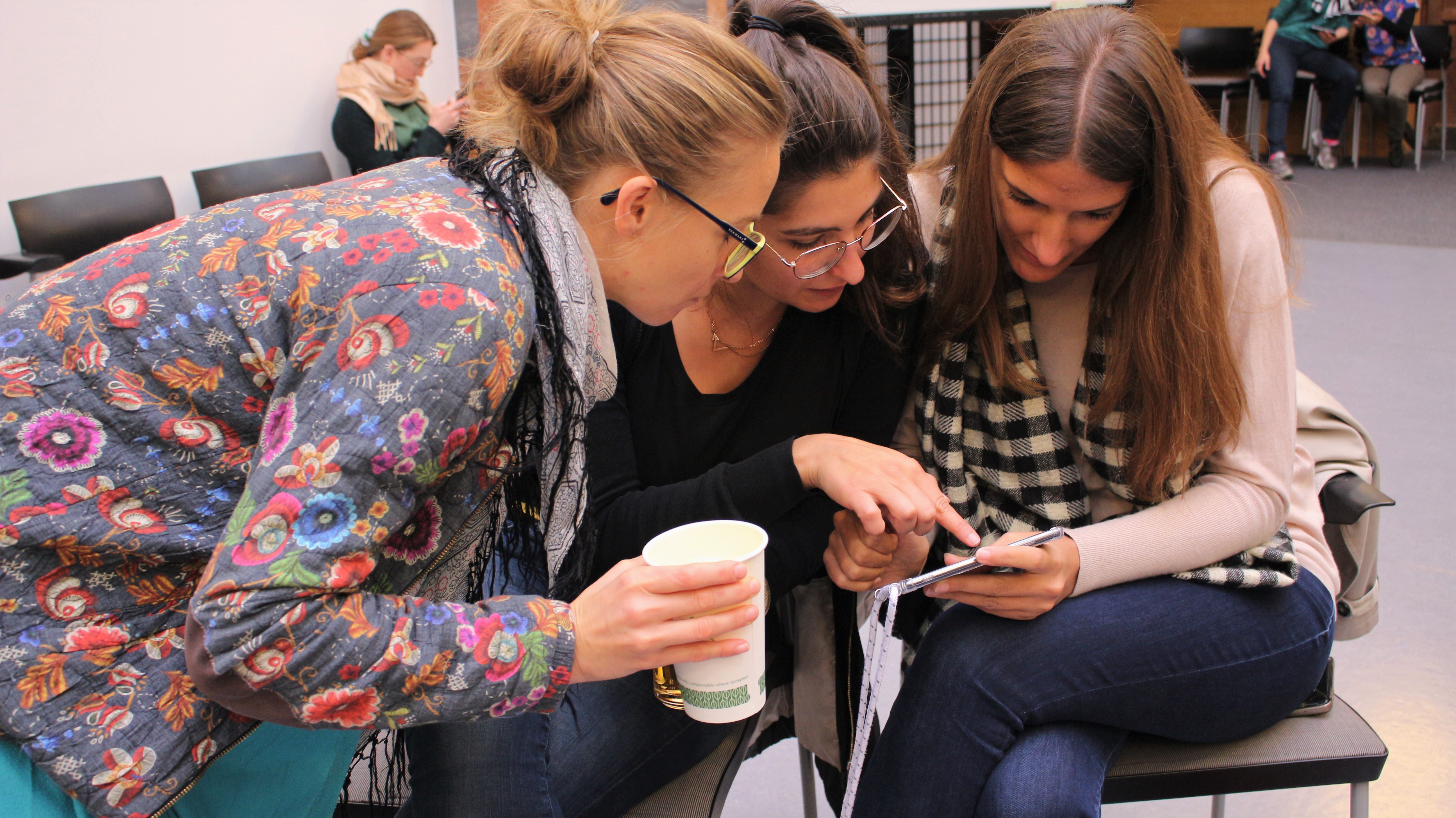 The power of post-truth, illiberal governance

The first afternoon session was about the power of post-truth, illiberal governance and finding successful ways to challenge it. The keynote speech given by Péter Krekó, a social psychologist and political scientist at the Political Capital, focused on the current political changes in Hungary, where free elections started to be described as unfair and because of the regular improprieties in the governmental institutions the Freedom House report classified it as partly free country (for the first time in history of the EU it happened to one of the full member states). The use of combination of ideologies and manipulating techniques led to the illiberal outbreak which the governing politicians and the dependent/state-owned media use to conduct severe personal and organizational attacks on Hungarian NGOs, being labeled as “Soros Army”. Because of the centralized, right wing Hungarian media empire with links to Fidesz, the pro-government and pro-Kremlin news spread together with fake news and conspiracy theories promoted by troll army depicting NGOs in Hungary as supporters of “terrorists” and “smugglers”.

Listen to his whole keynote here:

Although Hungary has been commonly referred as a laboratory of illiberalism and post-truth, Péter Krekó accompanied by Dalma Dojcsák from TASZ try not to lose their faith in the possibility of change and together in the discussion with EDN activists they were arguing that we should definitely not get used to the deterioration of democratic values and institutions, but instead invest in collective actions, strengthen social movements and continue building resistance to right-wing extremism. As good practices, both of our experts recommended fact-checking initiatives, advertising activities and positive PR entering in dialogue and direct communication with people, as well as the use of sense of humor. Building networks of allies and more engaged citizens, being close to each other and providing mutual support were indicated as strategies to oppose the worrying trends. At the same time, we should not forget about the diversification of incoming funds and supporting investigative journalists, who counterbalance the false and anti-immigrant narratives.

The story of the political situation in Hungary was complemented by a presentation by two experts at the European Roma Rights Centre – Angyalka Kulcsar and Andrea Ignacz – who told us about the situation of Roma Community, constituting around 9-10% of Hungarian society. As the largest minority group in Hungary, Roma people face pervasive discrimination based on multiple stereotypes and prejudices functioning in Hungarian society. Poor living conditions, housing problems, high risk of evictions, school segregation – all these limits the job opportunities, determine lower wages and worse situation of Roma people on the job market in Hungary. Children and women are the most vulnerable to poverty and violence and often face double discrimination.

Listen to the keynote of Angyalka Kulcsar:

"This Changes Everything" by Pneuma Szöv

The evening activities were co-organized together with TASZ, MitOst and KÖME - Association of Cultural Heritage Managers. Together with the guests of the 17th International MitOst Festival on the boat TRIP – we have participated in Mari & Marie's Early Night Show "This Changes Everything" by Pneuma Szöv artistic collective and its collaborators. In an interactive conversation with performative elements the artists provoked a collective reflection on shrinking civic spaces,  civic actors’ legitimacy, reputation, freedom of press, assembly and expression which are being challenged nowadays in many European countries and beyond.

Resilience vs Burn Out: Individual and Collective Tools

The last day of our meeting was dedicated to a training run by Péter Szil – a psychologist specializing in supporting people who experienced trauma themselves and/or deal with traumas of oppressed people. Since the members of our activist group are often exposed to traumatic situations (their own or of others), we focused on understanding better our experiences and getting to know the practical ways of gaining resilience, preventing burnout, as well as useful tools and methods for self-care. One of the methods which was recommended by our psychologist was based on the so-called “psychological recycling”. By segregating our experience and related feelings, we can choose to extract the energy from the traumatic events instead of following the long-term or permanent state of dissociation. Activism viewed as a form of therapy itself can help us to overcome our fears of going out from our comfort zones – within which changes are not possible to take place. 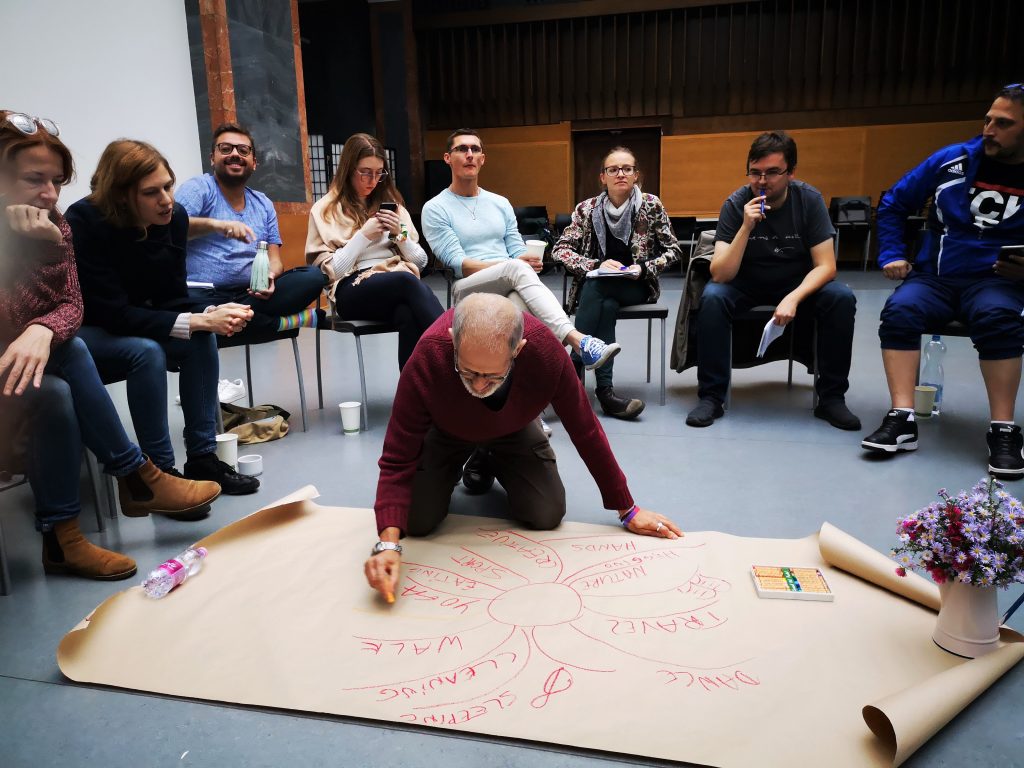 At the same time, while breaking down and burning out among activists is a very common phenomenon, we should all insist to have the right to psychological supervision. Acquiring a comprehensive know-how of caring, healing and achieving balance between our goals and capacities helps us to prevent the undesired consequences, instead of letting the accumulation of frustration and trauma leading us to a state dangerous for our health and social relations. Following the psychological advice – it is our collective task to create environments in which people are liberated from conflicts and we should use structural thinking in order to understand better historical and social contexts in which we live in. Find more resources on this topic here: Clinical Supervision: Resilience vs Burn Out

On Sunday afternoon, one of EDN participants Júlia Konkoly-Thege and her colleague Fanni Aradi from the movement The City is for All- Pécs shared with us their rich experiences in community organizing and campaigning going through the most important steps of the work as community organizers and important techniques related to working in small communities and strengthening their potential to solve problems and constructing effective grassroots organizing strategies by themselves. Find here a list of resources to get to know more on the topic. 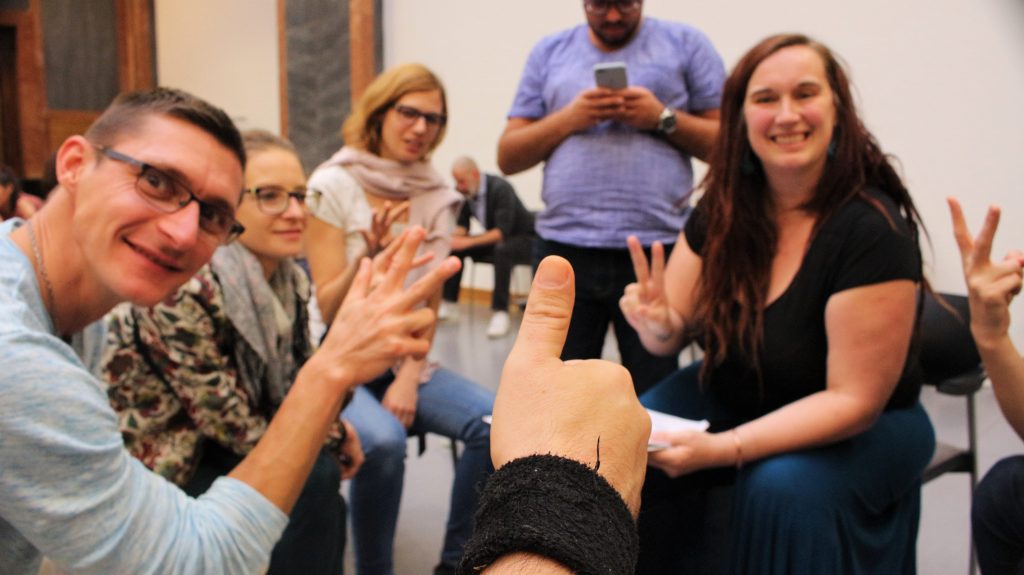 This way our group of activists fighting for climate and social justice, for democracy and human rights once again could come together to learn from each other, to improve their skills in mobilisation and advocacy and strengthen transnational solidarity. The weekend in Budapest was definitely enriching, interesting and simply unforgettable! Next time we meet in Paris!